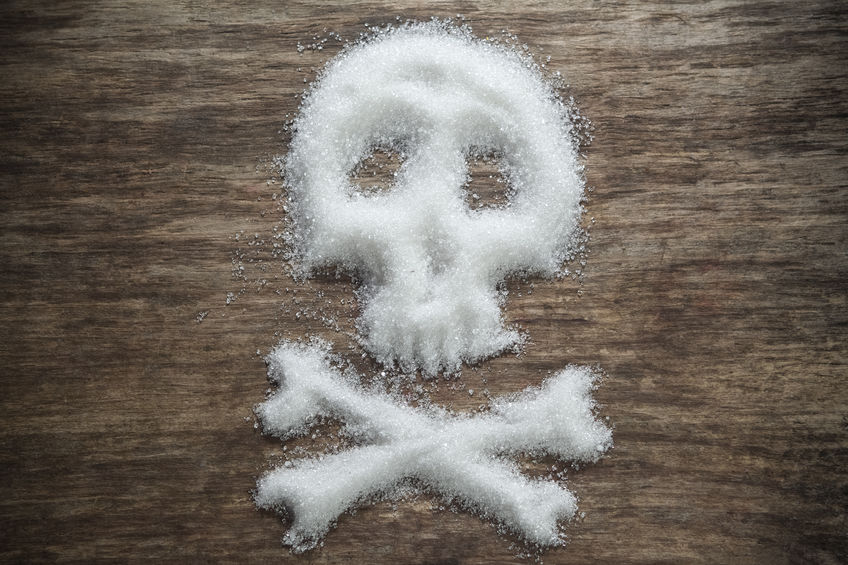 The United States is a nation with a sweet tooth — and a big one at that. The average American adult eats 22 teaspoons of sugar a day; teens eat closer to 34.1 In all, this amounts to nearly 16 percent of average daily caloric intake, up significantly from the less than 11 percent sugars contributed to Americans’ diets in the late 1970s.2

The biggest sugar culprits, as you might suspect, are soft drinks and candy, followed by cakes, cookies, pies and fruit drinks. But even sweetened dairy products like yogurt and sweetened breads, such as cinnamon toast, are adding to Americans’ heavy sugar load.

For health purposes, the American Heart Association recommends people cut way back on their sugar intake — to six teaspoons a day for women and nine teaspoons for men. The sweetener has been linked to numerous health issues ranging from obesity and high blood pressure to increased triglycerides, a marker for heart disease.3

You’ve probably also heard the notion that “sugar feeds cancer” … and may be wondering whether or not this is true.

Does Sugar Feed Cancer?
The idea that sugar feeds cancer is often attributed to Otto Warburg, a German researcher who received the Nobel Prize in 1931 for his discovery that cancer cells have a different energy metabolism than healthy cells.

Warburg believed that cancer cells originate from an “injuring of respiration,” or lack of oxygen, that is replaced by fermentation. In other words, cancer cells learn to thrive by gleaning energy from the fermentation of glucose, or sugar.4,5

Yet, the statement that sugar feeds cancer is often debated, since all cells, including healthy cells, use glucose to grow. It appears, however, that cancer cells do use sugar more efficiently, and in greater quantities, than healthy cells.

Don Ayer, Ph.D., a Huntsman Cancer Institute investigator and professor in the Department of Oncological Sciences at the University of Utah, told Science Daily:

“It’s been known since 1923 that tumor cells use a lot more glucose than normal cells. Our research helps show how this process takes place, and how it might be stopped to control tumor growth.”6

In studies conducted by Ayer and colleagues, it was found that both healthy and cancerous cells use glucose and glutamine (an amino acid) interdependently for growth. But by blocking the availability of glutamine, the entire cellular process “short circuits” and prevents glucose from doing its work, thus stopping the growth of tumor cells, according to the study.7

Harvard Medical School researchers also supported Warburg’s findings that growing tumor cells can crowd out the oxygen-carrying blood vessels needed for most cells to survive. In turn, some cancer cells learn to survive without oxygen, using the glycolytic pathway instead.

When the Harvard researchers blocked one of the pathways’ enzymes, LDHA, it essentially shut down the glycolytic process in breast cancer cells. Those cells, in turn, were far less deadly when implanted into animals than typical tumor cells, once again suggesting that the sugar-cancer link is real.8

In fact, many studies have looked into the link and revealed that there’s a definite connection between sugar consumption and cancer:

Does the Type of Sugar Matter?
Another recent study, this one by researchers from the University of California Los Angeles, found that a certain type of sugar — fructose — appears to feed cancer cells even more than glucose.12

The findings were so significant that the researchers suggested limiting the intake of refined fructose (found in soda and many other processed sweets) may disrupt cancer growth.13

Should You Avoid Sugar to Lower Your Cancer Risk?
Eliminating sugar from your diet is one strategy you can take to lower your cancer risk, but in most cases even limiting or moderating sugar will be an improvement. In light of recent research, you may want to start by limiting your consumption of fructose, such as high fructose corn syrup, first.

Even if you’re not convinced of the research suggesting sugar is the “preferred” fuel for cancer cells, limiting sugar in your diet is important nonetheless. This is because sugar is a source of empty calories, one that can contribute to obesity as well as elevated insulin levels — both of which can increase your cancer risk.

You should particularly avoid sugary foods in the morning, as a burst of refined sugar on an empty stomach will trigger a rapid rise in blood sugar, followed by a surge of insulin that will suppress your immune system and feed any abnormal cells, which are common in everyone’s body.

Still, remember that sugar is only one factor that may contribute to cancer. From a dietary perspective, sugar should be only a minimum part of your diet, while nutrient-dense foods — dark green leafy vegetables, deep orange vegetables, high-quality lean protein, healthy fats — should be the focus.

Of course, this doesn’t mean you’re not allowed to indulge your sweet tooth on occasion. As part of a healthy diet, a bit of sugar here and there is unlikely to cause any major problems. Just remember to regard sweets as treats, not staple foods, and be sure your meals are comprised of healthy, low-sugar foods most of the time.