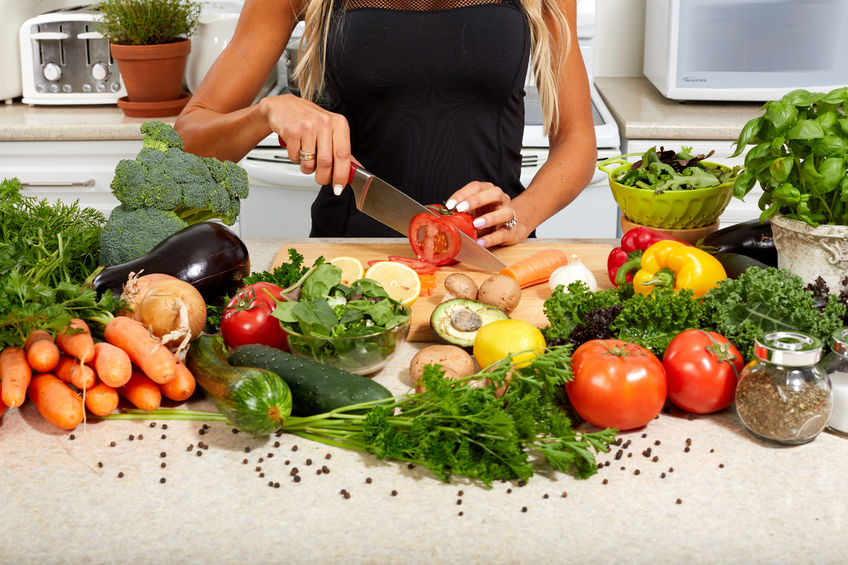 A raw food revolution is sweeping across the nation, bringing a dietary tradition that was once regarded as “fringe” squarely into the mainstream. In large cities, like Chicago and Manhattan, you can now find restaurants dedicated to all-raw recipes, which are promoted not only for their nutritional profiles but also for their taste.

But even some smaller cities are now boasting successful raw food restaurants, which is a sign that times are changing. Most of the customers at these trendy locales are not raw foodists but Baby Boomers, teachers, moms and dads, and policemen – they’re a diverse crowd who have heard about the benefits of raw, and are interested in giving their health a boost, one meal at a time.

The premise behind eating raw is that the food is not heated more than 118 degrees F, which is said to preserve enzymes and nutrients. When foods are cooked, oftentimes nutrients are destroyed in the process, and in many cases toxic cooking byproducts, like cancer-causing acrylamide, are produced.

One of the greatest claims to fame of raw food is its enzyme content. Your body does produce some enzymes on its own, but it can also benefit from consuming them through your diet. It’s thought that a long-term diet of solely cooked foods puts a heavy burden on your digestive organs, especially your pancreas, which must produce all the enzymes needed to break down your food. By consuming raw, enzyme-rich foods, you help your body to “predigest” the food and supply some of the enzymes necessary for proper digestion, giving your body a break.

There’s also the issue of nutrient content. Generally speaking, foods that are raw (or only minimally heated) will have more of their nutrients intact, and offer greater nutritional value to your body. For instance, one study found that cooking kale resulted in a loss of about 89% of the vegetable’s vitamin C content and 56% of its polyphenols. The researchers noted:1

“The cooking process of kale resulted in lowering of the antioxidant activity of its antioxidants especially of vitamin C, polyphenols and to the lesser extent of ß-carotene what confirms that vegetable should be eaten in raw form or just undergo little processing before consumption, for example blanching.”

There are some exceptions to this rule; for instance, cooked tomatoes are thought to be a better source of the antioxidant lycopene than raw tomatoes. Likewise, your body may more easily absorb the carotenoids in carrots and spinach if they’re lightly steamed first. But in most cases, raw fruits and vegetables will win out over cooked, nutrition wise.

Raw Foods are One of the Only Food Sources of Biophotons

Virtually all living things emit particles of light known as biophotons. This low-level light, sometimes described as “sun energy,” comes from the photons plants absorb when they are exposed to sunlight. German scientist Fritz-Albert Popp was the first to develop a biophoton meter, which allowed him to measure the light emissions coming from human beings (the light is generally unable to be seen with the naked eye, although some people see light, or “auras,” around people).

He found that healthy people generally emit more biophoton energy than do sick people, and he also theorized that some of these biophotons must come from our food. As you might suspect, processed, cooked foods contain virtually no biophotons, whereas raw, organically grown fruits and vegetables, along with wild-growing plants, emit the most.

Researchers are only now unraveling the complex ways in which light energy interacts with our cells, but it’s suspected that biophotons may be involved in numerous biochemical reactions, as well as promote healing. If your diet is devoid of raw foods, you will miss out on these important compounds.

When You Eat Raw, You Give Your Body a Break From Cooked-Food Toxins

As mentioned briefly earlier, the very process of cooking can lead to toxic byproducts that contribute to disease. You may be familiar with some of the cancer-causing substances formed by grilling, for instance. Among them:

Many studies have shown a correlation between eating well-done meat cooked at high temperatures and an increased risk of cancer, and at least part of that risk is likely due to these toxic cooking byproducts.

You may not realize, however, that there are more than 800 potentially dangerous compounds induced in your food by heat, and 52 of them may contribute to cancer.5 Some of these are only formed by high-heat cooking, such as frying and grilling, but others are formed simply by baking. Any time a food is cooked enough to have a brownish, yellow “crust,” it probably contains compounds that are not so good for you as a result.

The more raw foods you include in your diet, of course, the less you will be exposed to these toxic byproducts of cooking.

Are You Hankering For a Tasty Raw Dish?

Eating raw does not have to be “blah.” Summer is in full effect, and farmers’ markets are awash in colorful and delicious produce that can add some variety and nutrition to your meals. Check out LocalHarvest.org to find Farmers’ Markets and other forms of sustainable, healthy food sources near you. Many will offer biophoton-rich organic produce, and some even offer raw milk, which is growing in popularity due to its rich content of beneficial bacteria and enzymes.

If you’re new to eating raw, you may not realize how exciting it can be. Ideally, try out a raw-food restaurant where you can sample healthy creations you’ve never tried before. Next best thing, pick up a raw food “cookbook” for recipes you can make right at home, or get your feet wet by purchasing a vegetable juicer and whipping up a “green drink” made out of celery, cucumber, parsley, spinach and carrots — dee-lish!

And remember, eating raw doesn’t have to be all or nothing (and in fact probably shouldn’t be, as eating an all-raw vegan diet sets you up for nutrient deficiencies). Any amount of raw food is better than none at all. Try adding some to each meal, or making one meal a day raw. You’ll be glad you did.