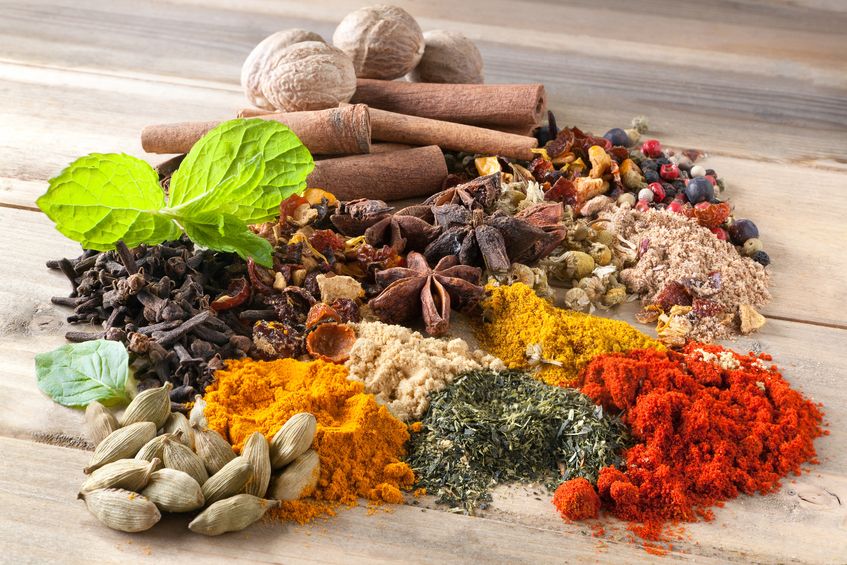 Most people add herbs and spices to their meals for the flavor and depth they add to virtually any food. Yet this is only the tip of the iceberg when it comes to reasons to use herbs and spices in your cooking.

Herbs and spices are packed with nutrition, antioxidants and other phytochemicals that can add therapeutic value to your food, helping you live a longer, more healthful life. Because each herb and spice is unique in its nutritional make up, the more variety you use, the better. Oregano on your salad? Cinnamon on your oatmeal? Ginger in your chicken soup? Yes, yes and yes!

If you’re wondering what makes herbs and spices so good for you, keep reading. And for you trivia buffs, herbs and spices are slightly different. The leaf of a plant is generally referred to as an herb while the other parts (such as buds, bark, root, berries or seeds) are generally called spices (which are often dried).

Don’t let its commonality fool you! Black pepper is a potent antioxidant that also has antibacterial and anti-inflammatory properties. It also triggers your stomach to increase the secretion of hydrochloric acid to help with digestion and is known to help prevent gas.[i] Research also suggests black pepper may benefit your nervous system and possibly boost your metabolism,[ii] while increasing the bioavailability of beneficial compounds in your food.

Basil is packed with vitamin K and contains flavonoids that protect your cells and DNA from damage. Basil also has potent antibacterial properties and contains compounds that may even be effective against antibiotic-resistant disease. Eugenol, another compound in basil, is anti-inflammatory, while whole basil offers important nutrients for cardiovascular health, including beta-carotene and magnesium.[iii]

Ginger is anti-inflammatory and may help to relieve pain from muscle soreness, menstrual cramps, headaches and other causes. It also helps prevent flatulence and is widely known for its role in soothing your intestinal tract, offering relief from motion sickness and nausea (including chemotherapy-induced nausea).[iv] Ginger has even been shown to help reduce feelings of hunger, which means adding it to your morning tea could potentially help you maintain a healthy weight.[v]

Turmeric is a bright yellow spice often used to make curry. One of its active ingredients is curcumin, a potent antioxidant. Among curcumin’s many benefits are support for the immune system and joint and mobility function.

Oregano use dates back to the ancient Greek and Roman empires, when the leaves were used for skin problems and pain relief, as well as an antiseptic. It also demonstrates one of the highest antioxidant levels among herbs and spices. According to the McCormick Science Institute (MSI):[vi]

“In Greece, an oregano infusion is still used as a folk remedy against colds and upset stomach and to maintain general health. Based on the current scientific literature, oregano extracts and individual constituents consistently have demonstrated antimicrobial actions in vitro toward food-borne pathogens

… Oregano contains several potent antioxidants that may contribute to the findings in preliminary studies that oregano exhibits benefits toward the cardiovascular and nervous systems, relieves symptoms of inflammation, and modulates blood sugar and lipids.”

If you’re getting ready to fire up your grill for the summer, it’s time to refresh your supply of herbs and spices. Adding them to your food, either as a marinade, spice rub or right into the meat (of a hamburger, for instance), can help reduce the formation of harmful compounds that are formed during cooking.

Adding spices to hamburger meat has been found to significantly reduce the formation of toxic cooking byproducts,[vii] for instance. In another study, steaks marinated in a Caribbean-style marinade had an 88 percent decrease in cancer-causing heterocyclic amines (HCAs), while an herb marinade and a Southwest marinade reduced HCA levels by 72 percent and 57 percent, respectively.[viii] The researchers concluded:

“ … the marinades contained considerable amounts of the polyphenolic antioxidants carnosic acid, carnosol, and rosmarinic acid with Caribbean being the highest. Commonly available spice-containing marinades can be effective inhibitors of HCA formation and provide reduced exposure to some of the carcinogens formed during grilling.”

Ideally, choose healthy marinades with high-quality ingredients and spices (or make your own) to help cut down on HCAs and other cooking byproducts. Cloves, rosemary, ginger, paprika, oregano, cinnamon, black pepper, garlic powder and others are all great choices. If you’re a barbecue fan, try this sugar-free spice blend from The University of Michigan Health System on all of your favorites:[ix]

With Herbs and Spices, You Won’t Even Miss the Salt

If you’re trying to cut back on excess salt, herbs and spices should become your go-to seasonings. They pack so much flavor into your food that you’ll never know the salt is missing. Try experimenting with herbs and spices that appeal to you to determine what your favorite spice blend will be. The University of Michigan Health System also compiled a handy guide of which spices work best with different foods.[x]

Is your mouth watering for a tasty, herbs-and-spices inspired treat? Try this recipe for basil pesto, from The University of Michigan Health System. [xi] It doesn’t get much healthier or tastier (not to mention easier!) than this: