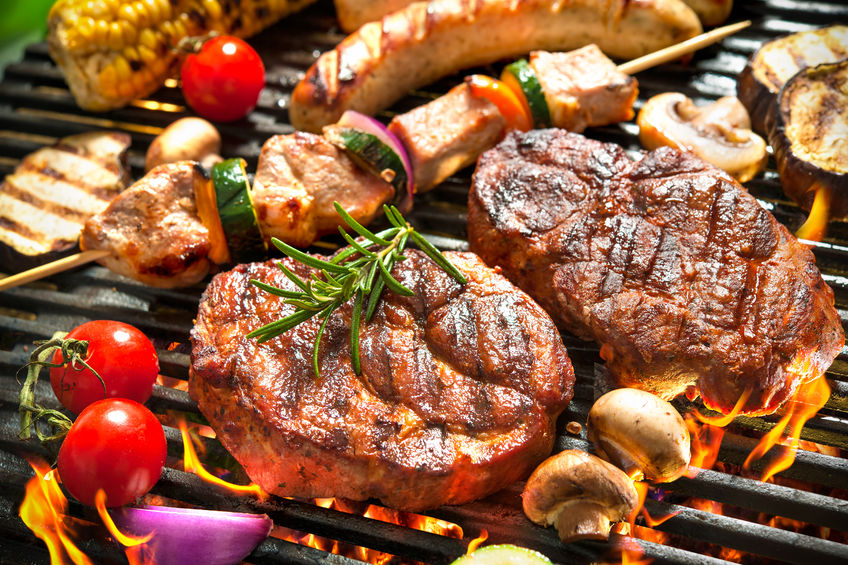 Few things spell s-u-m-m-e-r like the smell of hamburgers and hotdogs on the grill. For Americans, grilling could easily be described as a national pastime — nearly 70 percent of the population grills outdoors, and 41 percent do so year-round.

If you think that’s dedication, Consumer Reports found 32 percent have grilled when it was below freezing, 68 percent when it was raining and 26 percent when it was snowing, sleeting or hailing! Most popular, though, is grilling outdoors when the sun is shining, to celebrate holidays like Memorial Day and the Fourth of July, enjoy the time outdoors and even keep the kitchen cool and help cut-down on cleanup.1

Of course, we didn’t forget one of the most important reasons why Americans love to grill: the taste. Eighty-six percent of Americans surveyed by Consumer Reports National Research Center said they grill because they prefer the taste of grilled food.

If you fall into this category and describe yourself as a die-hard grill fanatic … or even if you just like a nice grilled steak now and again … you should know that by making small changes in your grilling habits you can drastically alter the health and safety of the grilled foods you feed your family.

Why You Need to be Grill-Savvy
The high temperatures and charring that give grilled foods their characteristic flavor are not the best for you, health-wise. In fact, grilling leads to the formation of cancer-causing substances in your food. Among them:

Many studies have shown a correlation between eating well-done meat cooked at high temperatures and an increased risk of cancer, and at least part of that risk is likely due to these toxic cooking byproducts.
For instance, a review of 30 epidemiological studies found that 80 percent showed a link between eating well-done meat and cancer.5 A separate study also found a link between charred meat and pancreatic cancer, with those eating the most very well done meat at a 70 percent increased risk compared to those who ate the least.6
The good news is that there are simple steps you can take to drastically lower the amount of toxins created by grilling, but first let’s set the facts straight about the following common grilling myths.

Myth #1: All Grilled Meat is Created Equal
Not true. While all types of meat can contain the cooking byproducts above, some may be more susceptible than others. In terms of HCAs, boneless, skinless chicken breasts are the worst offenders, followed by steak, barbecued pork, salmon and hamburgers.7

Myth #2: Beef is Beef
Again, not so. When choosing beef to grill (or cook in any form, for that matter), grass-fed is preferable to the typical corn-fed beef found at most supermarkets. Grass-fed beef contains less fat and more beneficial omega-3 and conjugated linoleic acid (CLA), which may help to fight cancer.8

No matter what cooking method you choose, it’s always better to start off with a healthier piece of meat, so instead of grain-fed beef, add grass-fed beef (and organic grass-fed beef if you can find it) to your next shopping list.

Myth #3: Marinades are Only for Flavor
Marinating your meat prior to grilling is a great way to add flavor, but it is so much more than that. Because high-quality marinades are also high in antioxidant-rich spices, they also help to drastically lower the amount of HCAs formed in grilled meat.

In one study, steaks marinated in a Caribbean-style marinade had an 88 percent decrease in HCA levels, while an herb marinade and a Southwest marinade reduced HCA levels by 72 percent and 57 percent, respectively.9

Adding spices to hamburger meat has also been found to significantly reduce the formation of toxic cooking byproducts,10 while acidic marinades, such as lemon juice and vinegar, are useful for reducing levels of AGEs,11 so feel free to use a wide variety of tasty marinade varieties.

Even marinating steak in red wine or beer,12 and chicken in olive oil, lemon juice and garlic,13 has been found to lower levels of HCAs by 90 percent, so the flavor options are nearly endless.

Eight Simple Tips for Healthier Grilling
If you can’t imagine summer without your old friend, the grill, don’t worry. You can continue to enjoy grilled foods in moderation without devastating your health, especially if you follow these simple but important tips to make grilling healthier:

Precook meats before putting them on the grill

Use smaller pieces of meat

Use marinades, herbs and spices freely

. They do not form HCAs like meats do, plus the antioxidants and phytochemicals they contain may help to lessen some of the damage HCAs, AGEs, and other cooking toxins cause in your body.

With these tips you can continue to enjoy the grilled foods you love in moderation while minimizing the health risks to your family. Now all that’s left to do is fire up the barbie!