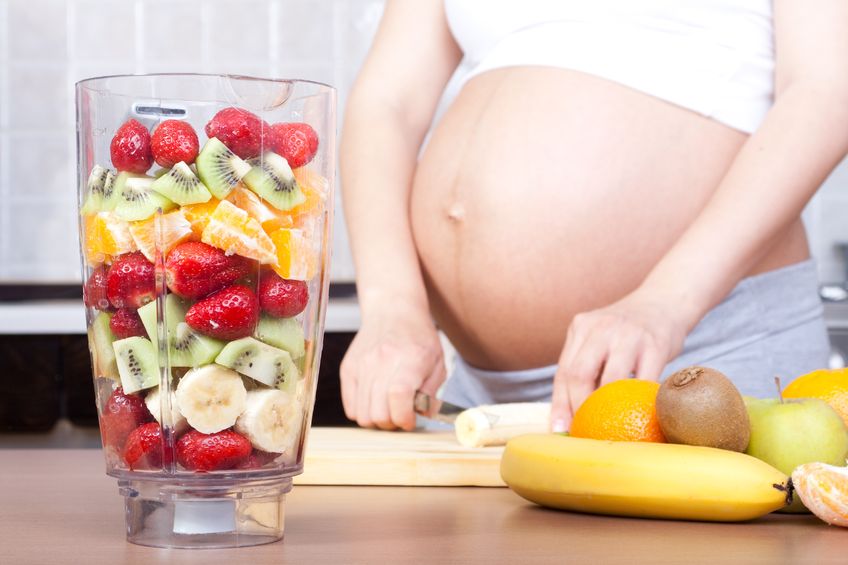 Good health begins with good nutrition. That mantra is especially significant for expectant mothers and newborns.

Diet, exercise, smoking, and consumption of alcohol, caffeine, or other drugs all affect the well-being of mothers and babies. With some increased awareness and perhaps a few dietary and lifestyle modifications, most expectant mothers and parents can offer their children a foundation of good health on which to grow and thrive.

Nutritional recommendations for pregnant women have been inconsistent over the years, largely because few human studies have demonstrated the exact ramifications of poor nutrition in pregnancy. However, researchers universally acknowledge that women’s nutritional needs change during pregnancy. Many of these increased requirements are easily met by simply consuming larger quantities of the same types of foods women may already be eating. But certain nutritional requirements of pregnancy and lactation require extra attention and effort to achieve.

All nourishment to the fetus is provided by the mother across the placental barrier during intrauterine life and, if the infant is breastfed, through the mammary glands in infancy. Both of these supply systems depend on adequate nutrient intake by the mother. Here are a few guidelines.

NOTE: The recommendations that follow are general guidelines only. They are not comprehensive and may not be appropriate for all women. Women who are pregnant should consult with their doctor regarding the best way to meet their increased nutritional needs.

Additional caloric needs can generally be met by eating additional food; no dietary supplements are required for this purpose. A portion of this requirement is offset in the third trimester because women tend to reduce their physical activity due to the difficulty of moving around during late pregnancy. Women who continue their work pace throughout pregnancy will have higher energy needs. Even these women, however, should be able to derive all the energy they need from dietary or stored protein and fat.

Eating adequate protein during pregnancy is essential for fetal and placental growth. Current recommendations for pregnant women call for a 10?16-gram per day increase over non-pregnant requirements. Pregnant women should eat at least 60 grams of protein every day. However, this requirement is easily met since most American women already eat enough protein to cover the increased requirement. Therefore, most pregnant women do not need any additional protein supplements. Women who are pure vegetarians (consuming no dairy, eggs, meat, poultry, or fish) should consult with their doctor to see if their protein needs are being met by their current diet.

The recommended daily allowance (RDA) for most vitamins increases during pregnancy. The vitamins and minerals listed below are just a few examples of the many required by pregnant women. A high-quality prenatal multi-vitamin/multi-mineral supplement is a good way for many women to meet additional needs for vitamins and minerals. Pregnant women should consult with their doctor at the beginning of prenatal care to determine how best to meet their increased nutritional needs.

Folic acid: The requirement for folic acid more than doubles during pregnancy. Deficiencies of folic acid during pregnancy have been linked to low birth weight and to an increased incidence of neural tube defects (e.g., spina bifida) in infants. Pregnant women should take folic acid supplements every day of their pregnancy. Most healthcare professionals recommend that women of childbearing age supplement with 400 mcg per day. Such supplementation could protect against the formation of neural tube defects during the time between conception and when pregnancy is discovered. Waiting to begin supplementation until you know you are pregnant may increase the risk of birth defects.

In one study, women who were at high risk of giving birth to babies with neural tube defects were able to lower that risk by 72% by taking folic acid supplements prior to and during pregnancy. To eliminate neural tube defects that are due in part to a genetic defect in handling folate, the FDA mandated in 1998 that folic acid must be added to fortify grain. Other dietary sources of folic acid include brewer?s yeast, soy flour, beans, wheat germ, lentils, walnuts, filberts, peanuts, and split peas. The effect of this fortification increases folic acid intake an average of about 100 mcg per day?still not enough to optimally protect against birth defects, according to many experts.

In addition to achieving significant protection against birth defects, women who take folic acid supplements during pregnancy have been reported to have fewer infections and to give birth to babies with higher birth weights and better Apgar scores (an evaluation of a newborn infant?s physical status, including heart rate, breathing, muscle tone, response to stimulation, and skin color.)

Vitamin B12: Deficiency of vitamin B12 can cause anemia and irreparable damage to the nervous system. Since B12 is present in all food of animal origin, a deficiency is rare, except in vegans (pure vegetarians). Food sources of vitamin B12 include meat, poultry, fish, eggs, and dairy. Vegans who are pregnant should take a vitamin B12 supplement. Low maternal B12 levels are more commonly seen in smokers and are associated with low birth weights and prematurity.

Vitamin B6: Vitamin B6 is required for synthesis of amino acids?the building blocks of proteins?and synthesis of the vitamin niacin. Women who have taken oral contraceptives immediately prior to pregnancy may be at increased risk of vitamin B6 deficiency. Good sources of vitamin B6 include brewer?s yeast, sunflower seeds, wheat germ, fish, beans, nuts, bananas, and whole wheat flour. Vitamin B6 supplementation well above the RDA (e.g., 10? 25 mg three times per day) has also been reported to help relieve the common nausea of early pregnancy.1 2

Vitamin D: Long appreciated for its positive effects on calcium balance during pregnancy, vitamin D may nevertheless be harmful if taken in excess. The RDA for vitamin D of 400 IU (International Units) does not change with pregnancy. This amount typically is found in many prenatal vitamins. This level of supplementation is safe if unaccompanied by other supplemental sources of vitamin D, such as cod liver oil and vitamin A/D pills.

Vitamin A: Since 1995, women who are or could become pregnant have been told by doctors to take less than 10,000 IU per day of vitamin A to avoid the risk of birth defects.3 However, the study upon which these recommendations were made has been contradicted by more recent research. A recent report studied several hundred women exposed to 10,000?300,000 IU (average exposure of 50,000 IU) per day.4 Surprisingly, no congenital malformations occurred in any of the infants exposed to maternal intakes of vitamin A that exceeded 50,000 IU per day. In fact, when compared with infants not exposed to vitamin A, the high-exposure group showed a 50% decreased risk for malformations.

A closer look at the recent study reveals a 32% higher than expected risk of birth defects in infants exposed to 10,000?40,000 IU of vitamin A per day and, paradoxically, a 37% decreased risk for those exposed to higher levels. This suggests that both ?higher? and ?lower? risks may have been due to chance. At present, the level at which birth defects might be caused by vitamin A supplementation is not known, though it may be higher than 10,000 IU per day. Nevertheless, women who are pregnant should talk with a doctor before supplementing with more than 10,000 IU of vitamin A per day.

Iron: Iron is an essential trace metal that is used for transporting oxygen in red blood cells, muscle, and the mitochondria (energy centers of the cells). Oxygen requirements for cell function increase during pregnancy. Therefore, the need for iron also increases during pregnancy. Healthy nonpregnant women should not supplement with iron unless they have an iron deficiency proven by a blood test. Many, but not all, pregnant women eventually require iron supplementation during pregnancy.

The highest risk for nutritional inadequacy of iron occurs late in pregnancy. To compensate for this risk, a woman?s intestinal iron absorption increases from 10% to approximately 50% in the last trimester of pregnancy. This ability to increase the efficiency of iron absorption is sometimes enough to meet the needs of the mother and fetus, provided there are sufficient maternal stores and adequate dietary sources.

Women may be iron deficient at the beginning of pregnancy due to inadequate diet, menstrual losses, or other factors. However, pregnant women should not automatically take iron supplements, but should discuss the matter with their doctor, who can determine their need for iron through simple laboratory tests. Every pregnant woman should have her iron status checked very early in pregnancy (or better yet, prior to conception) and again at 20 weeks gestation. These tests can usually identify a need for iron supplementation during the remainder of pregnancy and for several months after delivery.

Calcium: Calcium needs increase significantly during pregnancy. Low dietary intake of calcium is associated with increased risk of preeclampsia (pregnancy-induced hypertension, urine protein loss, and swelling around the ankles). In an analysis of 14 trials, calcium supplementation (1,500?2,000 mg per day) in healthy pregnant women at high risk for preeclampsia led to significant reductions in blood pressure.5 Moreover, supplementation with up to 2,000 mg of calcium per day by pregnant women with low dietary calcium intake has been shown to improve the bone strength of fetuses.6

Phosphorus: Although phosphorus requirements increase during pregnancy to the same levels as those for calcium, dietary deficiency of phosphorus is rare because it is so widely available in food. Most American adults get plenty, if not too much, phosphorus.

Zinc: Zinc deficiency clearly has adverse effects on the outcome of pregnancy, resulting in a higher incidence of fetal malformations and other poor pregnancy outcomes. In a preliminary study, pregnant women living in California who used a zinc-containing nutritional supplement in the three months before and after conception had a 36% decreased chance of having a baby with a neural tube defect compared to women who took no supplement. In addition, women who had the highest dietary zinc intake (but took no vitamin supplement) had a 30% decreased risk compared to women with the lowest dietary intake.6

Part 2 of this article will review diet and weight management, complaints and complications of pregnancy, and the advantages of breastfeeding.

Jeremy Appleton, ND, is a naturopathic physician, writer, and lecturer in the field of evidence-based complementary and alternative medicine. Dr. Appleton is an adjunct professor of nutrition at National College of Naturopathic Medicine and Senior Science Writer at Healthnotes.