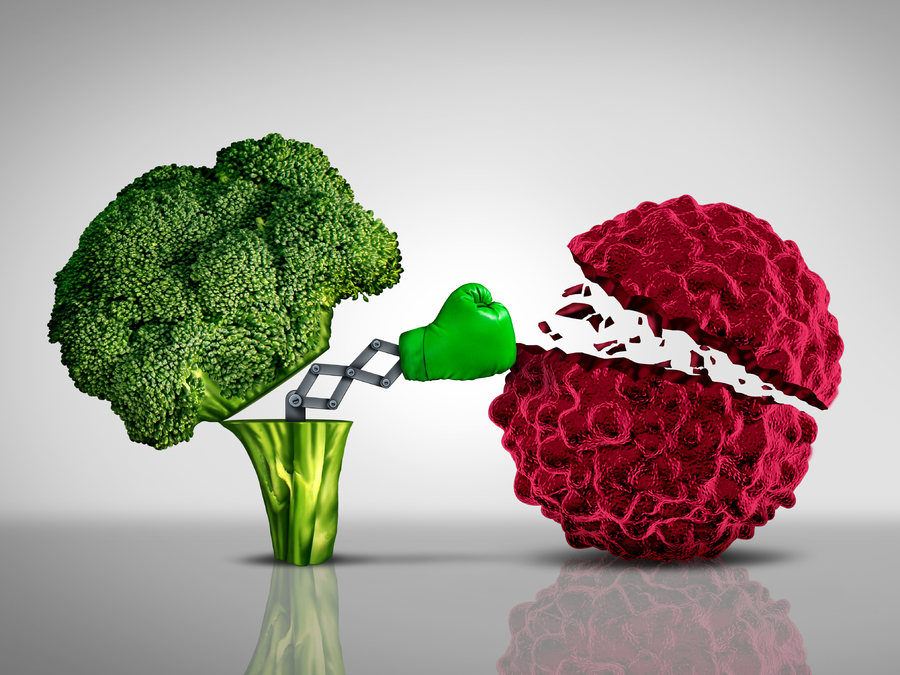 Advances in modern medicine continue to make headway against cancer, the most fearsome of diseases. However, despite therapies such as chemotherapy, radiation, hormone therapies, and surgery, cancer remains a worldwide scourge and its root causes are often poorly understood. Conventional medicine offers an array of drugs and procedures to treat cancer; many of them are highly toxic and damaging to normal cells and tissues. There is little agreement on how best to treat most forms of the disease. On one point, however, most experts can agree: Prevention is the best cure. A large body of research suggests that many types of cancer can be prevented with a healthy diet and lifestyle (e.g., regular exercise, not smoking).

Dietary Changes Support Healthy Cells
Eating plenty of fresh fruits and vegetables has been associated with reduced risk of several types of cancer. This is because such foods are loaded with cancer-fighting natural ingredients: antioxidants, flavonoids, fiber, and phytochemicals, and other special substances unique to plants.

Dietary changes should be on the prescription pads of doctors treating people with all forms of cancer. Recent research has shown that increasing intake of whole grains, vegetables, fruit, and legumes while decreasing intake of meat, dairy, and refined carbohydrates could slow the progression of the deadly disease.

Beyond these recommendations, there are numerous nutritional paths to follow, depending on whether the goal is prevention vs. the support of a person with an existing cancer. From a nutritional standpoint, antioxidants are critically important in the prevention of cancer, and also to reduce side effects caused by some conventional cancer therapies.

Antioxidants for Cellular Health
Despite a large amount of data published in the medical literature supporting a role for antioxidants in the prevention of cancer, and the reversal of adverse effects of chemotherapy and radiation, flawed studies continue to emerge (and continue to generate widespread, uncritical press) suggesting that antioxidant supplements are harmful and may even increase the risk of death (Bjelakovic et al, 2007). The media are engaged in a manipulative back-and-forth of hope and fear in their reporting on cancer. It may make for exciting press, but it leads consumers into confusion, and may defeat meaningful actions toward prevention.

Take media reports with a grain of salt. The conclusions of many such reports—most recently, that antioxidants could somehow suppress the efficacy of chemotherapy drugs and give cancer cells an advantage—have been discredited. The basic value of eating well and supplementing with antioxidants and other nutrients in an educated and directed manner remains sound. There are too many antioxidants to consider here in relation to cancer and cellular health.

Antioxidants During Chemotherapy and Radiation?
There have been some highly publicized reviews in mainstream medical journals that have concluded that cancer patients should avoid antioxidant supplements if they are receiving chemotherapy or radiation treatment (D’Andrea, 2005). Radiation therapy and some chemotherapy drugs produce free radicals, reactive chemicals that damage both cancer cells and normal cells. Antioxidants quench free radicals and reduce their toxic effects. Thus, some authors argue, they could theoretically protect cancer cells in the same way they protect normal cells. It is an interesting theory, but the best scientific evidence suggests otherwise. The flaw in this logic is that while many cancer drugs generate free radicals, they do not usually rely on this activity for their efficacy.

When antioxidants are given together with chemotherapy drugs in animal studies, they actually enhance the efficacy of chemo drugs. In many studies, they have also demonstrated an additional benefit: reducing the toxic side effects of the drugs.

No single statement can accurately characterize the safety and efficacy of antioxidants in combination with chemotherapy or radiation. The potential interactions are complex, and vary according to the type of cancer, the health status of the patient, which antioxidants are used, and how much is taken. However, the only systematic review of evidence on this subject found “that antioxidant supplementation during chemotherapy holds potential for reducing dose-limiting toxicities.” (Block KI et al, 2008)

In treating or preventing any disease, especially cancer, advice of a qualified health professional should be sought before taking any nutritional or herbal supplements.

D’Andrea GM. Use of antioxidants during chemotherapy and radiotherapy should be avoided. CA Cancer J Clin 2005; 55:319-321.