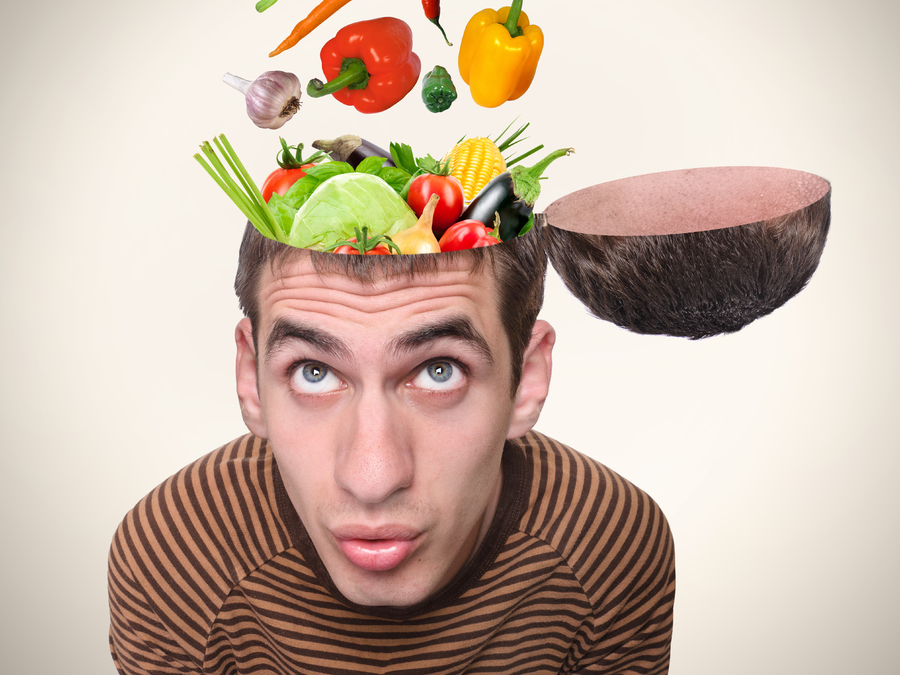 Have you ever noticed the “foggy” distracted feeling you get not long after eating a giant ice cream sundae or drinking a couple of cans of soda? This is one of the most common examples of how your diet is intricately linked with your brain function, including your ability to focus, concentrate and have a sharp memory.

Of all the organs in your body, your brain, arguably, has the toughest job.

Every time you think, breathe, balance, digest food, circulate blood, and countless other activities you probably take for granted on a daily basis, your brain is called to action. Likewise when you recall a memory or concentrate to solve a problem at work. In fact, your brain cells are so in demand that they require two times more energy than other cells in your body, as they exist in a constant state of metabolic activity.1 Even when you’re sleeping, your brain cells (neurons) are hard at work.

So, as you are probably well aware, it’s crucial that you nourish these brain cells with the proper fuel they need to thrive, as this will directly influence how well your brain functions on a daily basis. If you want to have a memory like an elephant and the focus to achieve, and surpass, your most coveted dreams, you’ve got to think of your brain when you eat.

You Can Even Grow More Brain Cells!

It used to be believed that you were born with all the brain cells you would ever have, and as you got older and brain cells were lost, there was nothing you could do about it. New research in the last two decades has turned this dogma upside down, as it’s now known that your body can, in fact, create new brain cells through a process known as neurogenesis.

These new brain cells can help improve your memory and learning, along with many other functions. In fact, the brain region with the most active neurogenesis is your hippocampus, which is the part associated with learning and memory. According to the Society for Neurosience:2

“Some very recent studies suggest that the strength of a memory can relate to how many new neurons remain in the brain after learning.”

See, it’s not a given that all new neurons survive. In fact, most will die because they do not get the support they need, namely nutrients from your blood as well as connections with other neurons.

There are numerous ways to help support this process and give new neurons the best chances of surviving and becoming a part of your working brain. Exercise and learning new things are two of the primary ones, but a third, and also important, strategy is your diet.

How to Improve Memory : What are the Best Foods to Boost Memory, Focus and Your Brain?

So what should you eat more of to give your brain an extra boost?

There are so many brain-boosting options in the produce section that your best bet is to simply remember that the more you eat, the healthier your brain will be. Fruits and veggies are rich in powerful antioxidants that can help protect your brain from the damage of free radicals. One study found that dogs fed an antioxidant-enriched diet performed better on cognitive tests and learned new tricks better than dogs fed a regular diet.3

The improvements, which researchers noted suggest dietary fortification with antioxidants over a long-duration can slow age-dependent cognitive decline, took only relatively small dietary changes to achieve — the equivalent of increasing your fruit and veggie intake from three servings a day to five or six.

Again, all types of produce are beneficial, but certain varieties do seem to stand out above the rest for your brain power, including:

“What blueberries do is what simply can be called strengthening the brain by taking advantages of the brain’s tremendous redundancy,” said Joseph. “Blueberries have compounds that boost neuron signals and help turn back on systems in the brain that can lead to using other proteins to help with memory or other cognitive skills.”

Spinach: Spinach is not just for your muscles, it’s also for your brain. Studies show rats fed spinach perform better on memory and learning tests. Spinach also supplies magnesium, a deficiency of which has been associated with ADHD, confusion and lack of focus.

A classic study by Joseph even found that rats fed a diet supplemented with spinach, blueberries and strawberries were actually able to reverse age-related deficits in neuronal and cognitive function.5

Apples: The antioxidants in apples may help to raise levels of acetylcholine, a neurotransmitter that’s essential to memory. The study, published in the Journal of Alzheimer’s Disease, noted:6

” … consumption of antioxidant-rich foods such as apples can prevent the decline in cognitive performance that accompanies dietary and genetic deficiencies and aging.”

Fish, flaxseed and walnuts are excellent sources of animal-based and plant-based omega-3 fats. Omega-3 fats are essential for healthy brain function, particularly the omega-3 fat DHA (docosahexaenoic acid). DHA is the principal omega-3 fat in brain gray matter, and recent research showed DHA supplementation increases the activation of the dorsolateral prefrontal cortex part of the brain, which is associated with working memory.7

Past research has also shown that omega-3 fats are essential for optimizing brain growth in children (including in utero), as well as improve the symptoms of ADHD, including better concentration and attention.

Aside from wild-caught fish, you can also get animal-based omega-3 fats from a fish oil supplement.

Eggs are rich in choline, a B vitamin that promotes the production of the neurotransmitter acetylcholine (key for proper memory formation). A lack in production of acetylcholine is linked to Alzheimer’s disease and dementia. During pregnancy, choline is also essential for normal brain development.

Beef contains zinc and iron, both of which can help your brain health, memory and concentration. Iron helps to enhance the distribution of oxygen throughout your body, including to your brain.

What About Herbs and Supplements?

A balanced diet that focuses on fresh, whole foods is your best choice for optimal brain function, but there is some evidence that certain supplements may be beneficial as well. Some of the most promising include:

Is the Best Brain Food None at All?

If you’re really interested in boosting your brainpower to the next level, there’s evidence that suggests restricting your caloric intake may lead to significant benefits for memory and brain function. One study revealed that calorie restriction led to a significant increase in verbal memory scores in the elderly,9 and while those who restricted calories got a brain boost, those who ate whatever they wanted experienced a decline in mental function.

So cutting back on what you eat, i.e. eating very lightly, may be the best “brain food” of all. In the study noted above, calorie restriction was defined as a 30 percent reduction in calories. If you go this route, make sure the calories you do eat count by choosing nutrient-packed foods for all of your meals.

As an aside, remember that exercise is also a proven strategy for increasing neurogenesis. So, if calorie restriction isn’t for you, you can significantly boost your brain health just by eating healthy and exercising regularly.