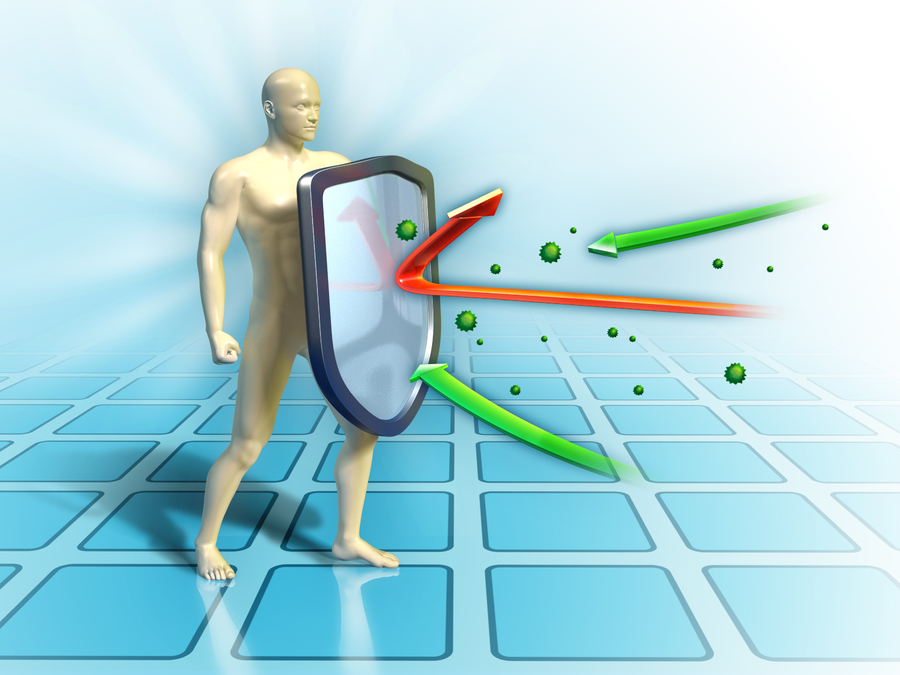 Your immune system is an amazingly elaborate system designed to protect you from foreign invaders. When bacteria, parasites, fungi, viruses and other pathogenic microbes enter your body — via your nose, mouth or eyes, in food, water, or air, or through sores or cracks on your skin — your immune system launches its attack.

How Does Your Immune System Work?

Your immune system is made up of millions of cells, tissues and organs that interact to make a complex, protective defense system. Your first line of defense is your skin, which acts as a barrier against invading pathogens and also secretes an antibacterial substance to kill mold and bacteria. Generally speaking, bacteria and viruses cannot permeate your skin unless you have a cut or abrasion that allows them an entry point.

If an invader tries to enter through your nose or eyes, your tears and mucus in your nose and lungs contain lysozyme, an enzyme that helps break down bacteria.1 You may also sneeze or cough if a microbe enters your nose or throat, which may expel the pathogen outright.

If a bug enters your stomach, stomach acid will destroy many varieties. And if it manages to survive all of these primary defense mechanisms, it will still have to make it past tightly packed epithelial cells and mucus, which make it difficult for invaders to get into deeper cell layers.2

When bacteria, viruses or parasites get deeper within your body, this is when your immune system launches a full-fledged attack.

Infectious diseases, which include everything from colds and flus to AIDS, are the most common cause of illness in humans. Typically these result when a germ makes it past your body’s first broad defenses, and then takes up residence deeper within your cells, bloodstream or tissues. But if your immune system is functioning properly, the invader will not be allowed to stay without a fight.

As the National Institute of Allergy and Infectious Diseases states:3

“The immune system is amazingly complex. It can recognize and remember millions of different enemies, and it can produce secretions (release of fluids) and cells to match up with and wipe out nearly all of them.

The secret to its success is an elaborate and dynamic communications network. Millions and millions of cells, organized into sets and subsets, gather like clouds of bees swarming around a hive and pass information back and forth in response to an infection.

Once immune cells receive the alarm, they become activated and begin to produce powerful chemicals. These substances allow the cells to regulate their own growth and behavior, enlist other immune cells, and direct the new recruits to trouble spots.”

For instance, antibodies may attach to a bacteria and direct special cells called phagocytes to destroy it. They can also attach to viruses and kill them before they’re able to enter your cells, and if a virus enters your cells, the cell will “flag” itself as infected so another component of your immune system, your T cells, can then destroy it.4

In the case of certain parasites, especially those that are larger than bacteria and viruses, immune cells will surround the invader and release chemicals in an attempt to kill it.

As you can see, this system requires a coordinated attack that is put together by many different immune system components. The main components of your immune system include:5

The Role of Nutrition in Your Immune System Health

Your diet plays a major role in how well your immune system functions; malnutrition is actually the most common cause of immunodeficiency in the world.6 In general, a diet that’s rich in whole fresh foods, including fruits and vegetables, lean meats and healthy fats like those from olive oil, avocadoes, nuts and fish, will give your body the nutrients it needs for a healthful immune response.

Specifically, there are numerous foods that may give your immune system even more support, such as broccoli, fennel, berries, whey protein, asparagus, chard, sweet potatoes, spirulina and more. What does this diverse list of foods have in common? They’re rich in antioxidants, which are your immune system’s best friend.

Why Antioxidants are Important

This makes them highly reactive, meaning they quickly interact with nearby molecules in order to “steal” an electron to complete their pair. This, in turn, leaves the other molecule with an odd electron — in other words it, too, becomes a free radical, prompting a chain reaction that leads to the creation of more and more free radicals, and increasing free radical damage.

This is where antioxidants come into play. These beneficial compounds are able to neutralize free radicals by supplying them with an extra electron, thereby breaking the cycle of free radical damage. Antioxidants are unique because even after donating an electron they remain stable and do not become free radicals themselves.

For this reason, eating an antioxidant-rich diet is one of the best ways to curb free radical damage in your body while also optimizing your immune system.

Some important antioxidants to include are:

Each antioxidant has a slightly different impact on your immune health. For example, glutathione has been described as the “most important antioxidant” because it empowers the immune system to exert its full potential by quenching free radicals, recycling vitamins C and E into their biologically active forms and regulating DNA synthesis and repair.7

Carotenoids are said to enhance many aspects of immune function,8 and selenium helps prevent cellular damage from free radicals and plays a role in the immune system.9

So for best results you’ll want to include a wide variety of antioxidants in your diet, which is easy to do when you eat plenty of fruits and vegetables (many of which contain multiple antioxidants in a single serving).

By maximizing your antioxidant intake through a healthful diet, your immune system will be well nourished and supported, and able to provide the defense you need.