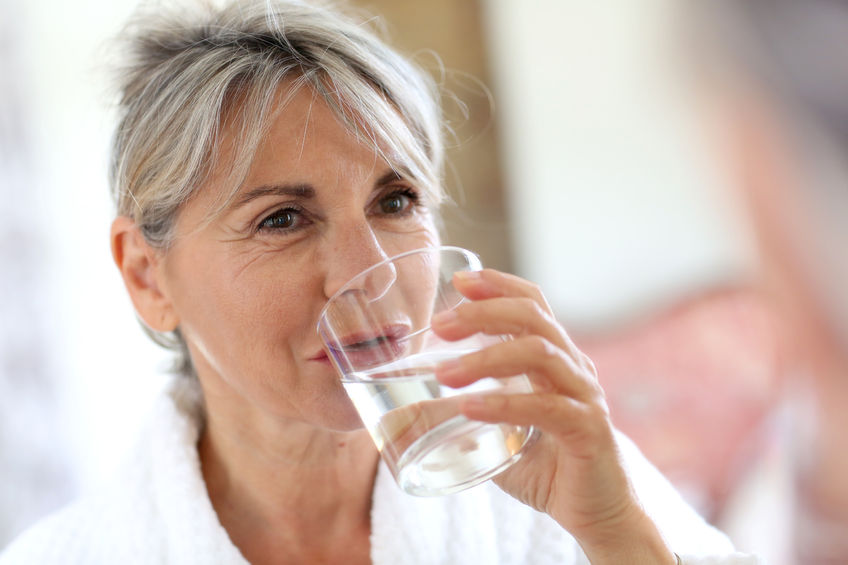 You can survive for weeks without food but if you lack access to water for just days, it can be deadly. This is because water is a crucial element to your survival and your ability to thrive.

Aside from making up 60 percent of your body weight, your body depends on water to carry out virtually every bodily function, from carrying nutrients to your cells to eliminating waste and flushing toxins from your organs.

While public health experts vary on just how much water you need to stay healthy (recommendations range from eight 8-ounce glasses a day to listening to your body and drinking enough so you rarely feel thirsty), no one will argue with the fact that access to clean water is a cornerstone of human health.

What may surprise you, however, is that securing pure water may not be as simple as turning on the tap or even opening a bottle.

Is Your Tap Water Safe?
Tap water is the go-to source for drinking water for many Americans, as it’s both inexpensive and convenient. But while the U.S. Environmental Protection Agency (EPA) regulates U.S. drinking water supplies under the Safe Drinking Water Act, only about 90 contaminants are regulated.1

When you consider there are more than 60,000 chemicals in use in the United States, and no new chemicals have been added to the EPA’s drinking water regulation list since 2000, it suggests there may be some quite large safety gaps.

In fact, an analysis of government records by The New York Times found that hundreds of chemicals have been associated with a risk of cancer and other diseases when found in drinking water at even small concentrations. The Times pointed out that even some chemicals regulated by the EPA may pose health risks at smaller concentrations than previously thought, yet many of the regulatory standards have not been updated since the ‘70s or ‘80s.2

Upon analyzing test results from more than 19 million drinking water test results from 45 states and the District of Columbia, The Times found that 62 million Americans may have been exposed to drinking water that, while well within safe guidelines legally, “did not meet at least one commonly used government health guideline intended to help protect people from cancer or serious disease.”3

Drinking Water Violations, Contamination Common
The Times also revealed through their analysis of records from water systems and regulators around the United States that violations to the Safe Drinking Water Act are quite common. They revealed:4

Further, there is mounting concern that pharmaceuticals ranging from antibiotics and antidepressants to pain and cholesterol medications, are increasingly showing up in public water supplies.

In one investigation by the Associated Press, drinking water supplies for 41 million Americans in 24 major metropolitan areas were found to contain an array of pharmaceuticals, albeit in very tiny amounts.5 For now, no one knows for sure what impact prescription drugs in drinking water might have on the U.S. population, there is no required testing for the drugs and no set safety limits for drugs in drinking water, either.

Disinfection Byproducts: Another Drinking Water Concern
Water suppliers use disinfectants to kill bacteria in drinking water, but when these chemicals (such as chlorine) interact with naturally occurring organic matter (such as decaying vegetation) in the water, dangerous substances called disinfection byproducts (DBPs) are formed.

When chlorine is used, two common DBPs are trihalomethanes (THMs) and haloacetic acids (HAAs). These substances have been linked to cancer, birth defects, increased risk of miscarriage and other reproductive and developmental effects. (As an aside, you can be exposed to DBPs not only from drinking chlorinated water but also from showering and bathing in it.)

There are 600 different kinds of DBPs, but the EPA currently regulates only 11 of them.6

Bottled Water Has Its Own Share of Problems
With the issues surrounding tap water safety, you may already be planning to stock up on bottled water as soon as you get up from your computer — but this may not be the best alternative.

For starters, regulatory standards for bottled water (which are monitored by the U.S. Food and Drug Administration, (FDA)) are often less stringent than those the EPA uses for tap water, according to a report by the U.S. Government Accountability Office (GAO) released June 2009. Further, the FDA does not have authority to require bottled water producers to use certified laboratories for water quality tests or to report test results — even if violations to FDA standards have been found, GAO reported.7

While you can find where your local public water supply comes from, along with any contaminants found after treatment, by visiting your water utility’s Web site, most bottled water manufacturers do not disclose water sources, treatment methods or contaminant testing results.

In fact, an investigation by the Environmental Working Group (EWG) revealed that only two of the 188 bottled water brands they looked at disclosed water sources and treatment methods on their labels, and water quality test reports on their Web sites, while only 18 percent disclosed contaminant test results.8

You should know, too, that some bottled water is bottled tap water that may or may not have undergone additional treatment. So being bottled is not necessarily a measure of purity, as a separate EWG report found 38 chemical pollutants in 10 popular bottled water brands they tested. Among them, one-third were chemicals not regulated at all in bottled water. Other detected contaminants in bottled water included:9

All that for a premium price that can be 1,900 times the cost of tap water, according to EWG. Bottled water is also a strain on the environment, as up to three-quarters of water bottles produced in the United States are thrown away and never recycled.10 And it doesn’t end there …

BPA Lurks in Some Bottled Water
Polycarbonate plastic bottles, the kind that are shatter-proof, durable and reusable, typically contain bisphenol-A (BPA), a chemical that mimics the female hormone estrogen and has been linked to cancer, heart disease, diabetes, liver problems, and reproductive health effects.

“Exposure to BPA, used in the manufacture of polycarbonate and other plastics, has been shown to interfere with reproductive development in animals and has been linked with cardiovascular disease and diabetes in humans …

Numerous studies have shown that it acts as an endocrine-disruptor in animals, including early onset of sexual maturation, altered development and tissue organization of the mammary gland and decreased sperm production in offspring. It may be most harmful in the stages of early development.” 12

So even if the water in your reusable water is pure to start, it could become contaminated with BPA if you choose to drink it out of a polycarbonate bottle.

You can avoid BPA in bottled water by not using polycarbonate bottles and avoiding plastic bottles marked with #7 on the bottom, as these may contain BPA.

Pure Water Tips for You and Your Family
Given the varying quality, expense and environmental toll of bottled water, you may find it’s most affordable and safe to use tap water for your family’s drinking water needs. To assure the quality is high, start by asking your local water utility for their annual water quality report, which should show levels of contaminants and how they compare to the EPA’s standards.

If you want to have your tap water tested independently, or if you have a private well (in which case you should test your water at least once a year), look for a state-certified drinking water laboratory that specializes in residential water testing.

Depending on the results of the test, or if you’d like extra assurance that your tap water is safe, a home filtration system can be used. This may be especially important for people with compromised immune systems, such as those undergoing chemotherapy for cancer, the elderly and infants who may be more susceptible to harm from water contamination.

When choosing a filtration system, be aware that different units remove different contaminants from water, while some use multiple technologies to remove a wide variety of contaminants. Depending on your needs, you may want to try:

By being aware of the status of your local drinking water quality report, and filtering your water using a high-quality filter if you’d like extra protection, you can enjoy all the benefits that pure water gives to your body, without the worry of excess contaminants.