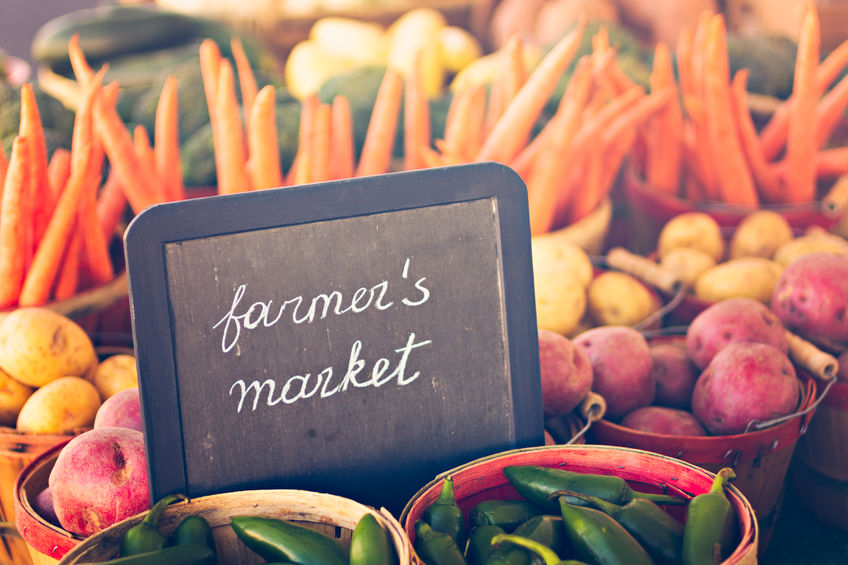 If the results of a most jarring recent survey about obesity rates in America — particularly among Baby Boomers — soaring way past epidemic proportions was the final broken straw that scared you straight toward better eating habits, congratulations for making the decision to choose better health over immediate convenience, nourishment over expedience and short, sweaty trips to the gym over longer hospital stays.

Still, some of you may be resisting change because you’re concerned this transition, especially at the dinner table, may cost more than an arm and a leg. So, where do you start?

With some smart planning and shopping, you can begin to improve your health and save some money right away with a trip to your local farmers’ market, one of the oldest forms of direct marketing used by small farmers around the globe to connect with neighboring consumers.

Although they vary in size and quality, the way farmers’ markets operate in towns large and small (from the more traditional mercados in the Peruvian Andes to as many as 23 diverse markets in the San Francisco Bay Area) remains roughly the same. Groups of farmers gather in open, designated public areas, mainly seasonally (but sometimes year-round), to share their home-grown and often cheaper, whole, natural and, occasionally, cooked foods with the public.

Even before the economy went into the tank, however, the growth of farmers’ markets was exploding, rising some 260 percent over the past 14 years, according to the USDA, to nearly 4,700.

Apart from the sour national economy, experts believe this uptick may be a product of the Slow Food Movement founded two decades ago to reverse the damaging effects of fast food and faster lifestyles and to counteract the disappearance of local food. Others see it as a means to support local, smaller businesses over larger grocery store chains and to reduce our country’s reliance and consumption of fossil fuels

The underlying moral: Reducing the distance between you and where the food you eat is grown is good for the environment and your pocketbook. Of course, saving money and cleaning up the environment is all well and good, but you may still be wondering where health enters into the equation.

Consider the story of an obesity prevention specialist running a wellness program for the Texas Department of State Health Services and a veteran of farmers’ markets, who brought the farmers’ market concept to her office with the help of a San Antonio farmer and the Sustainable Food Center in Austin, Texas.

So far, it’s been a win-win proposition, not only for employees who spend at least 10 percent less on their weekly baskets of fresh produce than they would at the grocery store or the farmer who was searching for a way to keep his family farm alive for another generation. With the success of the concept assured, the Center is currently working on a plan to provide home-grown produce to the kitchens of Austin public schools.

Also, there’s the Alegent Health System, a healthcare provider based in Omaha, Neb., sponsoring farmers’ markets this summer at hospitals in Iowa and Nebraska to re-enforce the nutritional advice doctors often dispense to patients.

In both cases, plans to make cheaper, fresher and healthier whole foods more available were conceived as a means of subtly reversing the runaway epidemic of obesity.

There’s plenty of room to “grow” this movement. No more than 2 percent of all Americans shop at farmers’ markets, according to the USDA. The one thing that could stand in the way of farmers’ markets: The availability of fresh, local food.

Interestingly, Whole Foods, the biggest of all natural grocery store chains, may be doing something about it. The Austin-based grocer launched a $10 million program two years ago to help independent, local producers expand their businesses in hopes of supporting a brand new network of farmers.

Some tips that’ll better help you find healthy, locally grown foods at a farmers’ market near you or the corner grocery store:

2. Be aware that not all foods you’ll find at a farmers’ market are grown to stricter, pesticide-free organic standards.

3. Because the toxic residues found on fruits and vegetables not grown organically can be harmful, before you shop for whole foods anywhere, download the Environmental Working Group’s Shopper’s Guide to Pesticides.

4. Check out the newest version of Locavore 2.0, a free software application that can be used via the iPhone or Facebook to help you find farms and farmers’ markets within 100 miles of your home.

5. Be aware that there’s no national standard that mandates what “locally grown” actually means. Retailers like Wal-Mart consider “local” to be foods grown and sold in the same state, while Whole Foods extends that distance as far away as seven hours away from a store.

6. The range of products you’ll find at a farmers’ market varies greatly, from fresh flowers and fruit preserves to food vendors serving pizza, tacos and Korean barbecue, and may not always be as cheap as those you’ll find in a brick-and-mortar store.