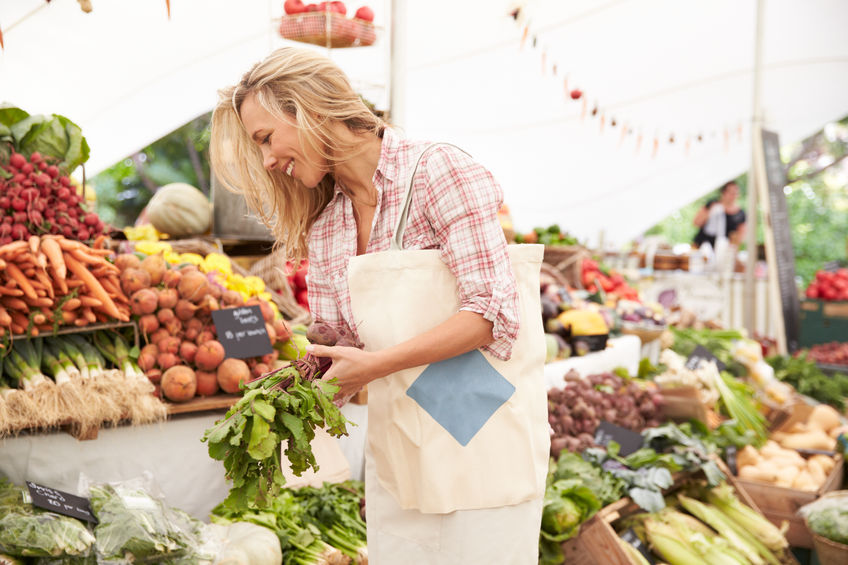 Organic foods, once relegated to health food stores and food cooperatives, are becoming increasingly common in local supermarkets. They now make up close to 4 percent of U.S. food sales, reaching sales of nearly $25 billion in 2009.1

Many seek out organic foods because of what they do not contain. By definition, foods that are certified organic under the USDA’s National Organic Program must be grown and produced without synthetic fertilizers, sewage sludge, antibiotics, irradiation, synthetic growth hormones, prohibited pesticides and genetically modified (GM) ingredients. They must also be free of artificial colors. flavors and preservatives. That said, organic products are also produced through approved methods that “integrate cultural, biological, and mechanical practices that foster cycling of resources, promote ecological balance, and conserve biodiversity.”2

Because of this, buying organic (and better yet local and organic) may help to foster not only your personal health, but also support the environment and the sustainability of the U.S. food supply.

Understanding the Organic Label — Natural Does Not Mean Organic

A wealth of foods may contain the word “natural” on the label, but not all of them are organic. In fact, even those that are labeled organic may not contain 100% organic ingredients. Here’s a quick guide to understanding organic and natural labeling:

Are There Health Benefits to Eating Organic?

Research suggests there may be differences in the nutritional content of organic and non-organic foods, with the organic varieties coming out on top. For instance, a report by the French Agency for Food Safety (AFSSA) revealed that, compared to non-organic food, organics:3

Another report by The Organic Center found that organic foods have, on average, 25 percent higher concentration of 11 nutrients, including antioxidants and vitamins A, C, and E.4 Interestingly, in addition to having higher antioxidant activity, vitamin levels and a generally longer shelf life, studies have shown that organic foods such as strawberries taste sweeter, have a better flavor and even look more appealing than their conventional counterparts.5

As for dairy products, research has shown that organic milk may be up to 68 percent higher in beneficial omega-3 fats, 6 while organic milk from grass-fed cows contain more conjugated linoleic acid (CLA).

Of course, by eating organic you are also avoiding exposures to potentially harmful additives, including pesticides. One particularly revealing study showed that consumption of organic fruits, vegetables, and juice can reduce children’s organophosphorus pesticide exposure levels from above to below the U.S. Environmental Protection Agency’s current guidelines, “thereby shifting exposures from a range of uncertain risk to a range of negligible risk.”7

Local and Organic: An Even Better Way to Shop?

As the organic industry has grown, so have the key players in the industry. Wal-Mart is actually the largest organic retailer in the United States. Whereas organic foods were once exclusively grown on small family farms, many now come from large industrial farms run by corporate giants that may cut corners on the organic standards. For instance, large organic producers have been accused of selling organic milk that comes from factory farms and even importing cheap organic ingredients from other countries with more lax standards.

Further, if you buy an organic food that must be shipped to you from across the globe, there is debate over whether the resources used negate those saved during organic production. A better option is buying locally grown organic foods, which come from small farms in your area. Not only does this support your local economy and give you the freshest food, it minimizes the impact on the environment, while assuring you know exactly where your food is coming from.

Tips for Buying Organic on a Budget

Organic foods can be more expensive than conventional foods, but there are many tips and tricks to keep costs down. In a new study conducted by Portland State University Food Industry Leadership Center, for the Bulk is Green Council (BIG), they revealed that you can save an average of 89 percent on costs by buying your organic foods in bulk.8 This included organic:

Additionally, many find success buying their foods direct from the farm. Web sites like LocalHarvest.org have made it easy for consumers to connect with small farmers directly, cutting out the middle-man and keeping costs low. You can also join a food coop in your area, which can purchase large quantities of organic products at lower costs, then split those foods up among its members.

As with any food shopping, keep an eye on sales at your local grocery store, as even organics do go on sale. Stock up when the price is right on non-perishable organics. Also become a regular at your local farmer’s market, and look for growers with organic produce that is in season and priced to sell. Sometimes if you visit near the end of the day, growers will sell their remaining stock for a reduced price.

Finally, spring is upon us in the Chicago area, and one of the best ways to secure organic foods on a budget is to grow them yourself. You only need a small parcel of land, or even a few large containers, to plant your favorite organic veggies and herbs, and they will be the freshest and most flavorful you will find.